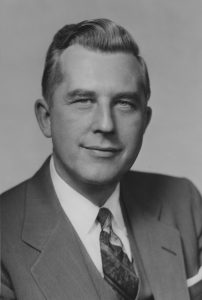 Robert Baumle Meyner (1908-1990) was born on July 3, 1908, in Easton, Pennsylvania, to Sophia Mary Baumle (1881-1968), who was born near Basel, Switzerland, and Gustave Herman Meyner (1878-1950), a loom-fixer in the silk industry, born in Manchester, New Hampshire. Robert Meyner had a younger sister, Olive Meyner Wagner, and an older brother, Gustave. During his early childhood, Robert Meyner’s family moved to Pennsylvania, and then to Phillipsburg and Paterson, New Jersey, and finally settled back in Phillipsburg in 1922, where the family lived in the house on Lincoln Avenue built by Robert Meyner’s grandfather, Robert B. Meyner. Reflecting the nature of the textile industry, the family’s moves had been necessary to find work. Mrs. Meyner was a ribbon weaver and worked in the mills whenever the family needed extra money.

Robert Meyner was graduated from Phillipsburg High School in 1926, where he was class valedictorian and a member of the debating team. He received his A.B. degree from Lafayette College in 1930 with a major in Government and Law. While at Lafayette, Meyner was a member of the Alpha Chi Rho social fraternity, the Knights of the Round Table honor society, the debating team, and the student council. He was a member of R.O.T.C from 1926 to 1928 and organized an Alfred E. Smith for President Club in 1928. He also participated in acting with the Freshman Players, the Repertoire Players, and the Shakespearean Players. In his senior year, Meyner was the editor-in-chief of the college newspaper, The Lafayette. As a young man, Meyner helped defray family expenses by delivering newspapers and working as a coremaker apprentice for the Warren Foundry and Pipe Corporation and the Ingersoll Rand Company. While in college, he also worked as a weaver for the Gunning Silk Company. Meyner received his L.L.B. from Columbia Law School in 1933 and was admitted to the New Jersey Bar in 1934. At Columbia, Meyner attended summer sessions and was able to graduate in just two and a half years. He worked as rental agent for an apartment near campus after morning classes, and his evenings were spent working as a parking garage attendant and also as a switchboard operator in a dormitory. He practiced law as an associate with J. Emil Walscheid and Milton Rosenkranz from February 1933 to April 1936 in Union City and Jersey City. In 1936, Meyner moved back to Phillipsburg to practice general law; he also served as counsel to Warren County and Pohatcong Township, New Jersey, and taught Business Law at Lafayette College. In 1940, the U.S. Supreme Court admitted Meyner to practice. He served as chairman of the junior section of the New Jersey State Bar Association in 1940, state chairman of the junior section of the American Bar Association in 1941, trustee of the New Jersey Bar Association between 1942 and 1943, and chairman of the committee on bar limitations between 1946 and 1947.

Meyner began his career in politics when he ran unsuccessfully for state senator from Warren County in 1941. His plans for political office were interrupted when he entered the U.S. Naval Reserve as a lieutenant in 1942. He was promoted to lieutenant commander in 1943 and went on active duty until 1945. He was promoted to commander in 1957 and continued to serve in the Reserves until 1966. During World War II, Meyner commanded gun crews in the American and European theaters and represented enlisted men as defense counsel in court-martial cases. Soon after his return home in 1946, Meyner ran unsuccessfully for a congressional seat in the Seventh District against J. Parnell Thomas. Meyner was elected to a New Jersey Senate seat representing Warren County by defeating Republican Wayne Dumont, Jr. in 1947. While in the legislature, he served as Senate minority leader in 1950, as chairman of the Democratic State Convention in 1951, and on numerous committees, including Appropriations, Game and Fisheries, Highways, Labor, and Industry and Social Welfare. Foreshadowing his gubernatorial career, Meyner called for investigations of organized crime in New Jersey. He gained a reputation for his debate skills and widespread knowledge of state issues. Additionally, during his legislative tenure, Meyner became a member of the New Jersey Medical College Commission, which advocated establishment of additional educational institutions in the state. Meyner was defeated in his reelection bid by Dumont in 1951 by only a few votes.

In 1953, Meyner won a close gubernatorial primary election over Democrat Elmer H. Wene and began a vigorous eight-month campaign. He was elected as the fifty-fourth governor of New Jersey in the general election by defeating Paul L. Troast by 150,000 votes. He was the first Democrat to be elected governor of New Jersey since 1940. Despite Republican majorities in both houses of the legislature during his first term and a Republican Senate during his second term, Meyner succeeded in enacting many of his legislative proposals and building the Democratic Party in New Jersey. Appealing to the citizens of New Jersey was central to Meyner’s legislative success; he hosted weekly television and radio programs and held frequent press conferences. His evenings were consumed by public appearances, and in his first year of office, Meyner averaged 50 speeches a month. Meyner was known for his commitment to open government and equal opportunity, promotion of rigid law enforcement, and exposures of crime and corruption. For example, he unearthed massive corruption in the state’s Employment Security Division. Meyner tripled state aid to education, reorganized state government departments, modernized state administration, and increased pay for state employees. He worked to establish the “Green Acres” open-space preservation system, and $60 million was spent to secure land for parks and recreation. Meyner also oversaw the completion of the New Jersey Turnpike in 1954. Despite these expenditures, Meyner was often identified as a fiscal conservative, largely because he insisted on a balanced budget. Nationally, Meyner was a fervent opponent of McCarthyism.

Meyner married Helen Day Stevenson, a distant cousin of Adlai Stevenson, on January 19, 1957, at Oberlin, Ohio, and the couple moved into the recently refurbished governor’s mansion, Morven, in Princeton, New Jersey. Earlier, Meyner was said to be romantically linked with both Margaret Truman and Grace Kelly. Throughout his governorship, Meyner’s guests at Morven included Harry S. Truman, John F. Kennedy, Lyndon B. Johnson, Nelson A. Rockefeller, Eleanor Roosevelt, and Fidel Castro. In 1957, Meyner was elected to a second term as governor by defeating state senator, Malcolm S. Forbes, publisher of Forbes magazine, by 203,000 votes. Meyner was the first governor in the history of the state to be elected to a second four-year term thanks to a constitutional change in 1947, which allowed for consecutive terms and afforded the executive considerably more power. During his second term, he continued to be a prudent administrator and recommended further improvements in transportation and education.

At the 1960 Democratic National Convention, Meyner gained the spotlight by joining Lyndon B. Johnson and Stuart Symington in attempting to block the nomination of John F. Kennedy. Meyner himself had been considered briefly by some part leaders as a possible candidate for the presidency. After completing his second term in 1962, Meyner returned to private law practice in Newark and Phillipsburg, New Jersey. President Kennedy offered him several ambassadorships, but Meyner decided he would rather resume law practice. In 1964, he became the first and only administrator of the Cigarette Advertising Code, which was developed by the major American tobacco companies in 1964 to prohibit false health claims and advertising aimed at young people. Meyner won the Democratic nomination for the New Jersey governorship again in 1969, but he lost in the general election to Republican William T. Cahill. He continued to practice law in New Jersey and died on May 27, 1990, at age 81. He was interred at the Phillipsburg Cemetery, Phillipsburg, New Jersey.

Meyner served on the boards of several corporations, including the Phillipsburg National Bank and Trust Company, First National State Bancorporation, Delaware and Bound Brook Railroad, Prudential Insurance Company, and Engelhard Corporation. He was also a member of many civic organizations and clubs, including the Pomfret Club of Easton, and he was a trustee of the New Jersey Bar Association. He served as a chairman of the Commission to Study Meadowland Development, the New Jersey Bicentennial Celebration Commission, the President’s Commission for the Observance of Human Rights Year 1968, and co-chairman of the Interracial Council for Business Opportunity.

Most of the contents of this page were retrieved from Lafayette College Special Collections & College Archives.

A full bibliography can be accessed here.