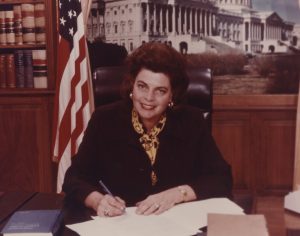 Helen Day Stevenson Meyner (1928-1997) was born on March 5, 1928, in New York City to William Edwards and Eleanor Bumstead Stevenson. Both of her parents held high Red Cross posts during World War II and were awarded the Bronze Star medal by the U.S. government. William E. Stevenson, a graduate of Princeton University in 1922, Rhodes Scholar, Olympic Gold-medalist in track and field, and former president of Oberlin College (1946-1961), also served as U.S. ambassador to the Philippines (1962-1965). Eleanor Stevenson was graduated from Smith College in 1923. Helen Meyner’s grandfather, J. Ross Stevenson, was president of Princeton Theological Seminary from 1914 to 1936. William and Eleanor Stevenson had a younger child, Priscilla Stevenson Hunt.

Helen Meyner was graduated from Rosemary Hall High School in Greenwich, Connecticut, in 1946. She graduated from Colorado College in Colorado Springs with a B.A. in history in 1950. While at college, she was a member of the Gamma Phi Beta social sorority. From 1950 to 1952, she served with American troops in Korea and Japan as a field worker for the American Red Cross. Between 1952 and 1953, she served as a guide for the United Nations in New York City. Meyner joined Trans World Airlines (TWA) in September 1953, working out of New York, as TWA’s national Consumer Advisor, “Mary Gordon.” One reason Meyner took the job was that it allowed her to practice her knowledge of five foreign languages. She resigned her position in 1955 in order to work as a full-time staff person on the presidential campaign of her distant cousin, Adlai Stevenson, the Democratic candidate for president in 1956.

Helen Meyner met her husband, New Jersey Governor Robert Baumle Meyner, when he was invited to give the keynote speech at a mock convention at Oberlin College in 1955. Helen and Robert were married on January 19, 1957, and moved to the newly renovated governor’s mansion, Morven, located in Princeton, New Jersey. Helen was a valuable campaigner during her husband’s re-election effort in 1957. As first lady, she participated actively in civic affairs and hosted frequent guests and official receptions at Morven. Meyner worked as a columnist for the New Jersey Star-Ledger from 1962 to 1969; her column, “In and Out of New Jersey,” included stories about New Jersey residents, descriptions of her travels, political commentary, and other topics. Meyner also was the talk-show host on a television interview program from 1965 to 1968, which aired on Newark UHF 47 and the New York Educational Television Channel 13. Additionally, she served as a director of the General Public Utilities Corporation and served on several other boards of directors. The Meyners, however, experienced a tragic loss with the birth and death of their son on February 11, 1970.

In 1972, Meyner was drafted to replace New Jersey’s 13th District Democratic candidate in the race for the U.S. House of Representatives, but she lost to Republican Joseph J. Maraziti by 26,000 votes. Meyner was inspired to run because of outrage over gerrymandering perpetuated by Maraziti in the New Jersey state legislature. In 1974, she was elected to represent the 13th District in the 94th Congress by defeating Maraziti by 20,000 votes in the midst of the Watergate scandal. Her district encompassed her hometown, Phillipsburg, as well as Hunterdon, Sussex, and Warren counties, and parts of Mercer and Morris counties. Meyner was reelected in 1976, defeating former state senator, William E. Schluter, by a close vote in this Republican-leaning district, but she lost her House seat in 1978 to James A. Courter. During her two terms in the House, Meyner served on the Committee on the District of Columbia, the Select Committee on Aging, and the International Relations Committee. The latter position was particularly treasured by Meyner because of her father’s ambassadorship and her extensive foreign travel. To preserve her place on the committee, Meyner sacrificed an opportunity to serve on the Ways and Means Committee. Within the International Relations Committee, Meyner served on the oversight subcommittee that monitored the CIA, military aid, the Peace Corps, and covert intelligence activities. Meyner opposed the Vietnam War and rallied to end military aid in Southeast Asia; she suggested humanitarian assistance be administered via organizations such as the Red Cross.

Throughout her career, Meyner was a champion for human rights, senior citizens, and preserving New Jersey’s environment. She also was active in promoting women’s participation in government and supporting the Equal Rights Amendment. During her first term in the U.S. House, she emerged as a chief spokesperson in a battle with the U.S. Department of Defense over the proposed closure of New Jersey’s Picatinny Arsenal, a facility vital to her district’s economy. Not only did she succeed in keeping it open, but she also persuaded the department to locate its new Army Armament Research and Development Command at the site. In her second term, she fought successfully to halt the Tocks Island Dam Project on the Delaware River and supported modifications to several flood-control projects along the Passaic and Wallkill River Basin. In her two terms, Meyner attracted over $200 million of federal dollars to her home district, far surpassing the other New Jersey representatives. In 1980, she served as a delegate to the Democratic National Convention.

Meyner became a member of the New Jersey State Rehabilitation Commission in 1971, and served on the boards of directors of the New Jersey Symphony Orchestra, Newark Museum, New Jersey Chapter of the United Nations Association, Prudential Life Insurance Company, Allied Chemical Corporation, Gerard Bank, and the American Folk Art Museum. She also served on the Board of Trustees of Rider College. After her Congressional terms, Meyner served on the board of the National Peace Academy, the Center for Conflict Resolution. Meyner received numerous awards and citations. She was given honorary doctorates by Colorado College (1973), Lafayette College (1976), Kean College (1976), and Rider College (1980).

Following the death of her husband in 1990, Helen Meyner moved to Florida. She died on November 2, 1997, in Fort Myers, Florida, and was interred at the Phillipsburg Cemetery, Phillipsburg, New Jersey. A memorial service was held for her in Colton Chapel at Lafayette College on December 12, 1997.

Most of the contents of this page were retrieved from Lafayette College Special Collections & College Archives.

A full bibliography can be accessed here.

An illuminating 1951 letter from Mrs. Meyner to her family can be viewed below: 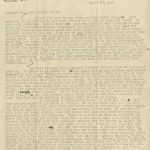 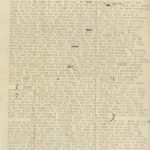 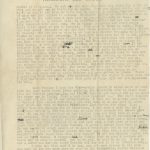