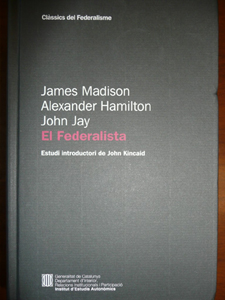 Prof. John Kincaid wrote an analytic introduction to the first translation of The Federalist into the Catalan language. The Federalist consists of 85 essays written in 1787-88 by James Madison, Alexander Hamilton, and John Jay to support ratification of the United States Constitution. This translation was just published by the Institut d’Estudis Autonómics of the Generalitat de Catalunya in Barcelona, Spain.

“Catalan, the native language of Catalonia, is spoken by about 14 million people,” said Dr. Kincaid. “When General Francisco Franco ruled Spain from 1936 to 1975, Catalans were prohibited from speaking their language.”